Limited seating will be available – lawn chairs (without bags) are allowed in designated areas. No outside food or drink.

Food and Drink Vendors will be on site!

In the early 1970s, a new form of music was emerging in the South. A mixture of blues, country, gospel and the English invasion of rock and roll that later was to be coined the phrase “Southern Rock.” The music was filled with style and emotion and with bands in the forefront such as the Allman Brothers, Lynyrd Skynyrd and a band from Jacksonville, Florida called Molly Hatchet. Named after a famous 17th-century axe murderess “hatchet molly” who would behead her lovers with the hand tool Lizzy Borden made famous. 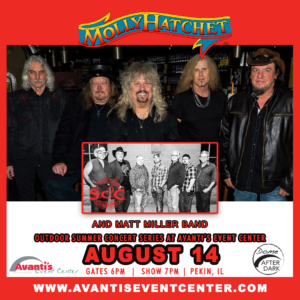